When the 2012 Olympic games open this summer in London, a Sooner will be among the world’s elite athletes.  Jonathan Horton, Olympic Gymnast, earned his bachelor’s degree in 2008 in Business Management from the University of Oklahoma, with hopes of using his Price College education to open his own gym someday.  While at OU, he became one of the most successful and decorated gymnasts in university history.  As a freshman, he took home over 10 event titles and two all-around titles.  As a sophomore, he accomplished more, winning 13 event titles and an astonishing six all-around titles and qualified for his first world team.  In his third season as a Sooner, Jonathan set records at OU, breaking Bart Conner’s career marks for career NCAA titles (5) and career All-American honors (15).  He was also the first athlete since Blaine Wilson to win back-to-back American Cup titles. 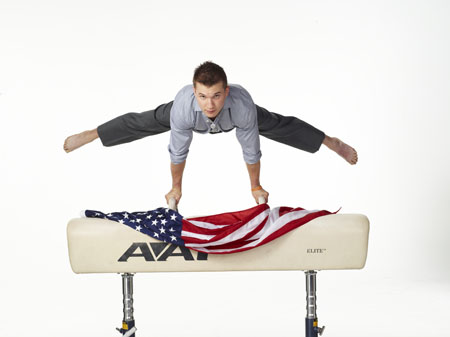 His senior year was one for the record books as well. He was one of five finalists for the 78th AAU James E. Sullivan Award presented to the nation’s top amateur athlete, but the best was yet to come.  He was the sixth OU gymnast to be named a Nissen-Emery Award winner. OU took home its eighth national title – five of which were in the last seven years. He finished first in the all-around at the 2008 U.S. Olympic Team trials, and was named to the 2008 Olympic team.  He was also the 2008 USA Gymnastics Men’s Athlete of the Year.

He’s now on another US Olympic Team.  The 2012 Summer Olympics are sure to set more records and push more limits.  Jonathan is proud to call the University of Oklahoma his alma mater and is a great representative of our university anywhere he goes.  Here’s to Jonathan!  The Sooner Nation will be rooting for you!